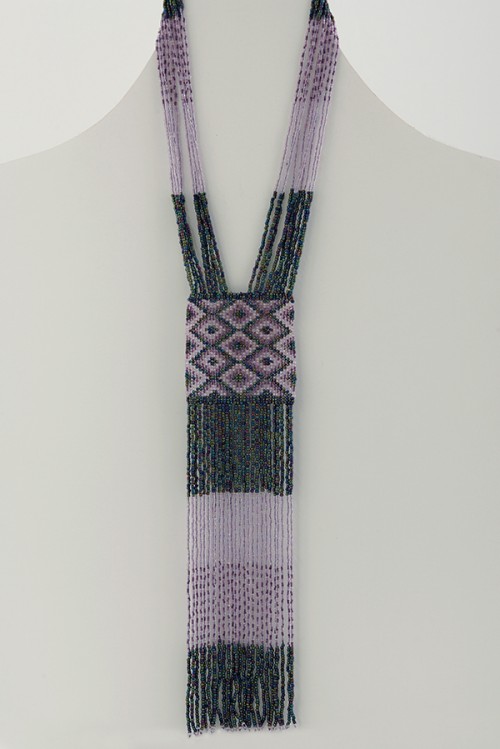 Great example of handcrafted Zulu beadwork, this piece is based on a traditional wedding scarf in an intricate pattern in colours of lilac, purple, oil and pearl coloured glass seed beads. Length: Long.

The founders of Ilala Weavers became interested in Zulu handcrafts after seeing a `pension pay out day’. On these days the local community set up markets to sell their handcrafts and home produce amongst each other. This included  specialist crafters, such as shield makers, assegai makers, basket weavers, potters and wood carvers (to name but a few). However, because of their isolation, they had no formal outlets for their work.

Their original vision was to help this very grass roots community to earn a living `with their hands’. This was particularly so for the women, many of whom were left at home to fend for their children while their husbands were living and working in the cities and mines.

Soon Zulu crafters from other areas were providing traditional Zulu crafts, from old beadwork and wood carvings to beautiful baskets woven from the Ilala Palm, which abounds in the area.

One of the items they have become well known for is their ANGELs. Including Angels Against Crime, the funds from which goes to assists various charities. For instance Life-Line Zululand for trauma counselling and outreach programs.

Other Angels are Peace Angels which stemmed from 9-11. Then there is the Angels with attitude which grew from the need to support an orphans’ meals scheme. Angels are made by the young people from tin cans an “earn and learn’ system which works well. Not only does it assist the young people but also cleans up the environment. The project provides the teenagers with a small income, money for the meals scheme and gives them a sense of self-worth.